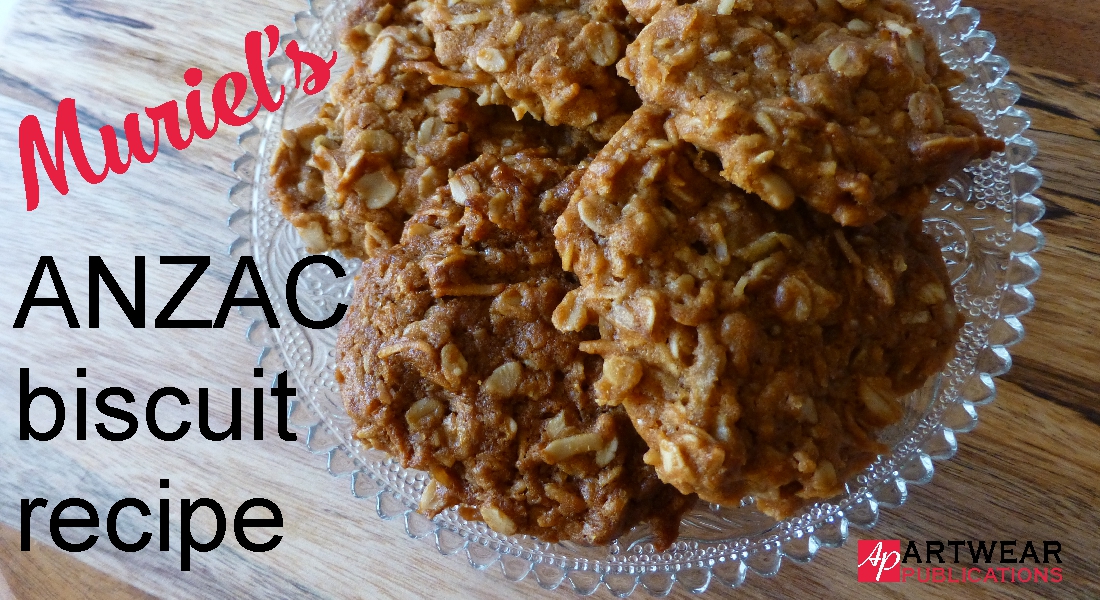 Posted at 22:48h in News Blog, Vintage Made by Artwear Publications 0 Comments

Anzac biscuits commemorate the coming of age of Australia and New Zealand through their joint participation in WWI.  There is deliberately no egg or milk in the recipe so the biscuits will not spoil or go stale quickly. The original army ration recipe was adapted for use in fund raising for the war effort.  My version produces biscuits that are more chewy than crunchy.

My second batch replaced some of the coconut with grated pear and grated ginger.

Step 2   Sift flour into a large bowl and stir in other dry ingredients to combine.  Set aside.

Step 3   Place the butter and golden syrup in a small saucepan over a low heat.  Stir until the butter is fully melted. Remove from heat.  Immediately dissolve the bicarbonate soda in the hot water and stir into the saucepan until well combined.  The mix will froth.

Step 4   Pour the hot liquid into the dry ingredients.  Mix together until fully combined.  Roll tablespoons of mix into balls.  Place on the baking trays, pressing on the tops to flatten them a little.  They will flatten considerably further during cooking, so allow room between biscuits.

Step 5   Bake for 12 minutes or until golden brown.  Let them cool and firm on a wire rack, if you can, before eating.

This recipe appears in Vintage Made issue 9 – our “Australian Made” issue, available HERE in print, or HERE in digital. Other recipes from Muriel in this issue are Damper and  Macadamia nut recipes (incl. cheesecakes).